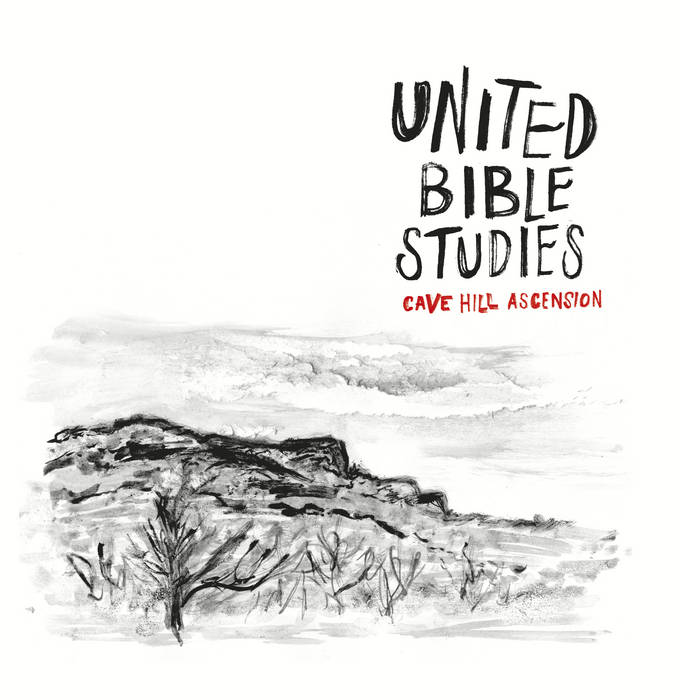 'Nearly two decades and countless members on since the collective’s inception yet still United Bible Studies are breaking barriers. ‘Cave Hill Ascension’ is the latest addition to the collective’s canon and another breathtaking journey into a strange yet beautiful world.

But can we just put the music aside for a moment and comment on the presentation of the collective’s work; United Bible Studies have yet to dress one of their albums in anything less than a compelling sleeve. There is almost always a disturbing, mystical beauty around the images chosen and ‘Cave Hill Ascension’ is no exception. The black and white sketch on the album’s front cover seems innocuous until you look deep into the image while listening to the album and your mind starts imaging its own scenario while you are climbing that hill. Likewise, the simple image on the back cover; a hand holding out a twig in the darkness says more about the sounds within than any words possibly can. That the album is presented in heavyweight red vinyl only adds to the attraction.

The collective is down to just three musicians for ‘Cave Hill Ascension’; mainstay David Colohan (Raising Holy Sparks) is joined by a couple of Owl Service members, Dominic Cooper and Alison O’Donnell. O’Donnell’s involvement alone is indication that the listener is in for a journey into the unknown. O’Donnell, along with United Bible Studies, has always had her work classed as ‘folk’ albeit only as a base reference. But what O’Donnell has accomplished, not only with her all too sporadic solo work but with her contributions to the output of United Bible Studies, Owl Service and Head By South to name just a few, is to not only push the boundaries of folk music but to create a new sound that defies classification. And that vision, in some ways, reaches a peak (no pun intended) on ‘Cave Hill Ascension’. When three musical visionaries such as O’Donnell, Colohan and Cooper get together the results are simply breathtaking.

There are just four tracks on ‘Cave Hill Ascension’; there are two tracks per side, a lengthy piece followed with a shorter song but really this is one of those albums that the listener needs to hear in one sitting; the sounds just flow into one complete experience which will take you far away from where ever you are sitting and place you in surroundings that, at times, are challenging but never far from beautiful.

‘Bless Us and Break Us with Mystery Upon Mystery’ is the first track and at just seconds short of fifteen minutes the wordless vocals which open the piece and which are a major part of the whole album draw in and envelop the listener immediately. The ghostly sound of these voices is somehow calming, the subtle shades offered by various instruments, often just fleetingly, just adds to the cinematic soundscape. ‘Bless Us…’ is a journey in sound that every listener is surely going to interpret in their own individual way; there’s plenty to explore just in this one piece alone and if you’ve ever felt alone when sleep evades you at 3 a.m. put the headphones on and wander around this gorgeous soundscape.

‘The Heart Lies, Over and Over’, is the short song on side one yet still clocks in at just over five minutes. Opening with the title sung over and over (again no pun intended) the track is more unsettling that the preceding piece especially when the vocals give way to drones and woodwind in the second section of the song but there isstill beauty and wonder therein.

‘Cave Hill Ascension’, the second lengthy piece (clocking in at over eighteen minutes), opens side two. Again haunting, wordless vocals play a major part in creating an atmosphere, this time possibly one more at one with nature than ‘Bless Us…’ The sparse opening section certainly evokes images of windy landscapes at times, chilling so, before those vocals arrive this time with a more unsettling result than the other lengthy piece. As more instruments and sounds are introduced the piece becomes even more compelling listening. For all the nuances that the synths, drones and other instruments offer it’s still those voices that the listener focuses on. Although conjuring up a completely different feel than that of ‘Bless Us..’, it has the same result; it’s a thought-provoking piece that it’s proven impossible not to return to time and again. Different circumstances, different seasons require different music and it’s all here on this album.

‘Hope You Know’ closes side two and it’s the shortest song on the album at just over three and a half minutes. As with the other short piece, it opens with the title of the song repeated over and over while wordless vocals, drones and woodwind create another soundscape of unsettling beauty. It’s another piece that will take your breath away.

People often say that a certain record changed their life; I’m still not certain that happens, but having certain records or pieces of music change one’s mood or even educating us in some way happens daily I believe. ‘Cave Hill Ascension’ is certainly capable of altering the listener’s mood and even possibly their day. Even during its bleakest moments there’s beauty to be found and when all seems hopeless there’s comfort to be found in the sounds on this album. Such a large back catalogue and still United Bible Studies are breaking new ground and taking those who listen on new journeys to unexplored territory. If you are familiar with the collective’s previous work you’ll know roughly what to expect and won’t be disappointed; if you’ve yet to discover the beauty of United Bible Studies then ‘Cave Hill Ascension’ is the perfect place to start. There’s more information at www.pariahchild.co.uk where you can also purchase the vinyl album. It’s the best option with such a lovingly presented set.'
www.pennyblackmusic.co.uk

'Four tracks, including two of epic length, on heavyweight red vinyl, on which United Bible Studies founder David Colohan is joined by Alison O'Donnell (Mellow Candle, Flibbertigibbet, The Owl Service) and Dom Cooper (The Straw Bear Band, The Owl Service). Bless Us & Break Us with Mystery Upon Mystery is meditative and spiritual yet with a dark undercurrent, pairing soaring wordless choral vocals with brooding synth drones. Ritualistic percussion signals a change in direction, with gentle neoclassical piano and ethereal washes of sound giving way to choral vocal beauty and lute-like ringing strings. The Heart Lies, Over & Over interweaves powerful vocals with airy yet unsettling use of woodwind and drones. Cave Hill Ascension is a multifaceted composition made up of several movements seamlessly segueing into one another. Its opening part is an evocative, filmic, neoclassical piece conveying images of wild nature and starry skies, while the second part is characterised by a full, resonant sound somewhere between folk and art music, incorporating reverberating guitar, violin, piano, synthesised choral voice, and the expressive vocals of Alison O'Donnell. Finally, drones, synths and forceful percussion unite to create a sense of foreboding. Hope You Know is a beautifully atmospheric blend of multi-layered vocals, pensive drones and meandering woodwind. A cinematic, mood-altering and deeply creative album that spans genres and defies classification.' www.blissaquamarine.net

'A new record from United Bible Studies is always an occasion to celebrate. ‘Cave Hill Ascension’ features a stripped down version of the collective comprising David Colohan, Alison O’Donnell and Dominic Cooper. There are two lengthy pieces interspersed with two shorter songs which between them create an air of elemental spirituality and a musical environment drenched in mood and emotion.

‘Bless Us & Break Us With Mystery Upon Mystery’ is nearly 15 minutes long and whilst essentially very minimal in its construction manages to create a rich ethereal soundscape where blissful waves of wordless vocals intertwine in ghostly, devotional dances in the air. Subtle pastoral, kosmische and sometimes Eno-esque colours elegantly accompany and further enrich the vocal core of the piece and the occasional lonely beat of a drum or plucking of strings only add to its spacious, filmic and lush beauty. It is achingly gorgeous with an unhurried, contemplative feel but loaded with mystery and fuel for the imagination. ‘Cave Hill Ascension’ is the accompanying lengthy piece and follows a similar trajectory where waves of wordless vocal sound fading in and out of focus and minimal drones, swells, beats, plucks and strums come together in various combinations through the musical journey. There is perhaps a stronger ritualistic sense to the music in part through more prominent moments of incantation and also a more pronounced minimal ‘post rock’ feel at times where I was reminded of bands such as ‘In The Country’ but United Bible Studies have taken these elements to their own special place where ancient and modern worlds collide very gently and beautifully indeed.

The shorter songs have a more pronounced song like structure and have a very strong and equally pleasing David Sylvian-esque sound in both the singing style and musical ambience. Repeating melodic figures are at the heart of the music in both ‘The Heart Lies, Over & Over’ and ‘Hope You Know’ which again feature complex and hypnotic swirls of vocal tracking and have an elegant tranquillity yet also a faintly brooding beauty within.

This record is a superb addition to the United Bible Studies canon and a wonderful journey into the cinema of the mind and I heartily recommend it to you.' Francis Comyn, Terrascope


And it looms over the riven land...If ye stand there, and stretch yr eyes out, ye hear tell ye can see Hy-Brasil. Ye can gaze out across the hills of Divis and Ligoniel, on through Ulster hills, to the Atlantean coast. And on past. Look west at sundown and watch the souls slip into the sunset. And on East ye gaze, across the loughs, across the drumlins wracked by Viking and planter spade to the Calf of Man, intermittent in the Black-Form. A land wrenched by giants from the soil. And if ye squint closer, through the gathering myst ye can watch the city slip down the slopes into the lough, and trace a line from nose to bow of ships launching in the east. Ships that carried flax, wound to linen, from earth to air, spun across an empire. And it looms over this riven land, as the brume rises and blankets the basalt. It ascends and holds from the Black Mountain to MacArts Fort. And ye feel the damp cling to yr neck as ye glimpse the limestone quarries, hewn from the mountain from. Quarries that helped to build a city, broken blast by blast. And closer still as the haar rises, the white of rock appears. Rock that held in abeyance, centuries neutral, shaped by hand to bring bombers home, back from German cities, incendiary and molten. And it looms over this riven land, and still it rolls in. From the Antrim Plateau, mist and moisture, and down below in Connswater, they’ll be talkin’ of how it’s settled in, and won’t be liftin’. Ye won’t see the hill for an age, and you’d not be seen dead, to be up there a day like that. And up ye are. As ye close yr eyes, held suspended, alone, Eternal. As the clouds rise, and the city falls, and ye gaze East to West, from the Calf of Man to Hy-Brasil. Black-Form to the setting sun. And ye dream as ye loom over the riven land, that ye might come back the way ye came, ye know.